The New Girls In Town… 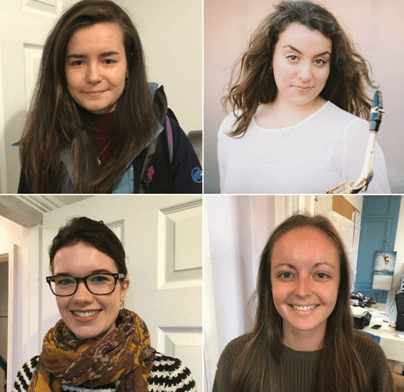 We’re busier than ever here at The Music Place so we’ve brought some new faces into the fold, and they’re pretty special! So, for this week’s blog, we’ve decided to get to know these gals a little better…

Emma grew up in West Sussex and started playing the flute when she was 7 years old. She immediately loved music and took up the saxophone when she was 12. When she was in sixth from she knew she wanted to perform, and so auditioned for music college but didn’t think it would come to anything! She got a place at every college she auditioned for and took her place at RNCM.

Since studying at the RNCM, she has toured with Riverdance as their musical director and saxophonist, and has performed as a soloist in venues such as Wigmore Hall, St Martin in the Fields and The Bridgewater Hall.

Emma has managed several international tours to China, Europe and around the UK. She also works regularly with Opera North and Manchester Camerata.

Excitingly, Emma will be giving a concerto appearance with The BBC Philharmonic Orchestra where she will be premiering a new work written by Tom Harrold! Her debut album will also be available from November 2019.

Heather grew up in a small town called Strathaven in Scotland. After attending a ‘Come and Try’ musical instrument session held in her town, she asked her parents if she could start taking lessons on the violin. A couple of years later she started learning the piano. Heather loves to play a variety of music and her favourite artists include Janine Jansen, Tom Odell and Jeremy Kittel. In her spare time she enjoys playing traditional music and she has recently joined a triathlon club!

Hannah attended Stamford High School; she played the trumpet and piano throughout her years at school and was involved in the school orchestra and concert band. After finishing school, Hannah took a year out to work on her classical playing and spent the year in Rome with an amazing teacher from Cecilia Conservatory, the best few months of her life! Throughout this period, Hannah flew back to the UK to audition for a number of music schools on their classical courses and, although she was successful, she really wanted a change and to be playing with other musicians. Luckily, the RNCM got in touch about a Popular Music Course and so she gave that a whirl!

Hannah fell in love with the RNCM; she met the most incredible people and musicians and was lucky enough to form a band called Young Monarch who have been writing and gigging together ever since. Since its formation, Young Monarch have got up to some really cool things; they’ve had a number of plays on BBC Radio 1 and Radio X, played the opening slot for the Proms at The Royal Albert Hall and supported Tokyo Myers, The Gipsy Kings, Sigrid and Rita Ora at Jersey Weekender Festival. They now have four tracks on Spotify… go stream them people!!

Amy grew up in Surrey. She started playing the violin aged five after joining a group class being offered at her school- it was what all the cool kids were doing so it seemed like a good idea! Nowadays, Amy works as a freelance violinist and violin teacher, performing with a number of different groups across the North West. Musically, Amy drew a lot of inspiration from the Lindsay String Quartet. In her spare time, she loves hiking and going for walks with her dog. She’s also taken up photography recently and is loving it!

Not a bad bunch eh! We’re really glad to be able to welcome such a great new wave of teachers into The Music Place family. We hope you all enjoy learning from them.

Have a lovely weekend everyone!